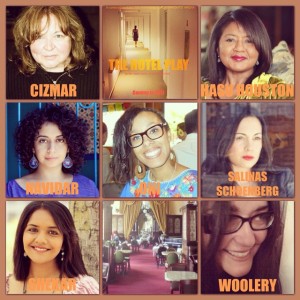 When Jon Lawrence Rivera asked me to be one of the writers of The Hotel Play, he hadn’t even gotten all the words out of his mouth before I said, Yes.  He hadn’t even gotten around to describing the project.  Or what it was intended for.  But I said yes blindly, partly because I have worked with Jon before and love it and I know that he is as stubborn as I am–or maybe more stubborn–so the project IS going to get done.  Part of it, also, was that he told me, “I’ve already asked Velina and she said yes, so…”  At that point, I was at the “Say no more” stage.  Not only is Velina a dear friend and the writer of gorgeous poetic plays, she is also a generous colleague.  You know the kind of people you really love, but you don’t get to spend enough time with them?  That’s the category Velina fits into in my life.  We meet in passing on campus at USC or get two extra minutes to chat before a meeting sends us off into the business of being teachers of writing.  We rarely get playwright-to-playwright time, and still less time to just hang out and chat. So, yes, collaborate with Velina = a few more minutes of time with her.  (Plus she is much nicer than I am–but I know she also has a will of steel–so who better to collaborate with?)  So having agreed to be part of this, I finally actually listened to Jon and heard his concept of the intended play–and by the way, I don’t get to spend enough time with him either, so we tend to speak really fast and in shorthand.   The phrase “you know” can be worth a thousand words.  And so I jumped in, not knowing a great deal,  and one day on Facebook, there it was:  The announcement of the writing team.  Fresh, bold, exciting.  Nahal Navidar.  Madhuri Shekar.  Julia Taiwo Oni.  Janine Salinas Schoenberg.  Laurie Woolery.  Plus Velina Hasu 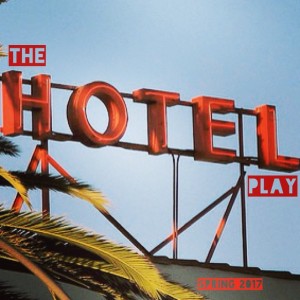 Houston and me.  A group of women whose voices are all very different from each other. Plus diversity!  Jon walks the walk on this one–Los Angeles is truly multicultural in every sense of the word, and this play will be written by and about the people who inhabit the array of neighborhoods and hidden corners of our city.  And then there is the sheer audacity of the whole project.  Yes, it’s going to be performed in a hotel, and no, we don’t know which one yet, or what kind of hotel, so yes, we’ll be winging it for awhile, and no, there isn’t a pre-planned outline or characters, and yes, the hotel may change at the last minute, and no, we’re not going to let that stop us, and yes, we are going to be bold and risky and ready to adapt and be flexible and go a little nuts.   So we had a first meeting–over lunch, because there has to be food.  And we talked and dreamed and speculated.  And then we went away to write something.  Anything.  Kind of based on the inspirations of the first meeting.  So now….I’m anxiously waiting to see what everyone has created in the first go-round, and how/if it fits together or if we can dance around each other in an interesting way, and how we’ll jump into the next round with our distinct styles and eccentric voices.   The Hotel Play will celebrate Playwrights Arena’s 25th anniversary in 2017.  It’s all good.  We have time.