Home Articles From the dogs… 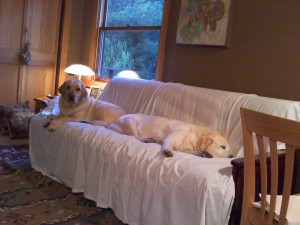 Boo-no and Oskey Oscar, hard at work, burning the midnight oil.  They found a little bit of time to share this tiny excerpt from my short play Boodaboy.   A scene between Dog and Marge…

MARGE: You can appreciate that, can’t you? How nice it is to drive home from work?

Dog cocks his head at Marge.

MARGE: Oh well, it wasn’t much really. I mean there were cars. And just the thinnest sliver of moon. The lights of the planes from LAX hanging right under it. Well, they weren’t from LAX per se. They were in holding patterns, hovering in one tiny point in the sky. Under the skinny moon. It was a magnet for them. Or more like a mother hen and her chicks. No. Well. That’s what I thought, anyway. Of course, everybody saw that. Not just me. The moon, you know. It was in the sky.

DOG: You were looking up? And then you saw—

MARGE: Oh yes. I looked up in the sky. I knew where the cars were. No need to bother keeping my eye on the road. The cars pull each other along anyway. Like migrating geese.

DOG: So. The moon. The planes.

MARGE: Yes. And I thought, perhaps I’ll just pull into the market for a quick minute. I didn’t need anything that I could think of. But I was quite convinced I needed to stop.

DOG: You pulled in.

MARGE: Between a lovely old, restored Mustang and one of those newish family vans.

MARGE: Do you know, I believe a cold front has come down from the Canadian Rockies. Yes, very nice. I suddenly felt a great love for these days when the night falls earlier. People seemed happy. Calm. And I just walked inside and immediately was drawn to the beef and ground meat section. And there he was.

DOG: The man you say was—

MARGE: Yes. Buddha. He had a long-sleeved t-shirt on this time. Under his robes. He was a bit chilled, I could tell, but smiling—oh just smiling.

DOG: Marge. You are sure? You’re quite sure—

MARGE: The way he smiled. Well, I must tell you, it just made my day.

DOG: Yes. That would do it.

Dog cocks his head at Marge—a little worried. He scratches. He paces.  Not  sure what to make of this. He lies down.  Marge rubs his head.