365 Women A Year in Los Angeles

There are so many untold stories–and so many extraordinary women who haven’t been spoken of, let alone depicted onstage.  The 365 Women A Year project is designed to start solving that disparity, with new short plays about incredible women in history–one for each day of the year–being created annually.  (It’s almost time to sign up for 2016, playwrights.  Check out the site.) 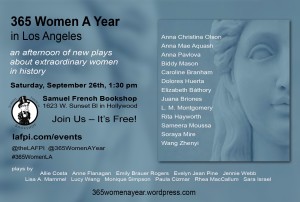 And, of course, some of the 200+ playwrights who have committed to telling these forgotten or often-ignored stories live in California.  So, on Saturday September 26, Three-Sixty Five heads to the Samuel French Bookshop for 365 Women A Year in Los Angeles–An afternoon of readings, refreshments, and opportunities for connecting with theatre people.  And it’s all free.  My play, YERBA BUENA, is about Juana Briones, a mixed-race curandera from the early 1800s who took on the powers-that-be (and the Catholic Church!) and became a landowner and one of the founders of the settlement that was to become San Francisco.   And there are more–plays about Dolores Huerta, Anna Mae Aquash,Wang Zhenyi,  Rita Hayworth, Sameera Moussa, and L.M. Montgomery (yes, the author of ANNE OF GREEN GABLES).  Jennie Webb, Lucy Wang, Monique Siimpson, and the other playwrights really want to see you there.   They told me so.